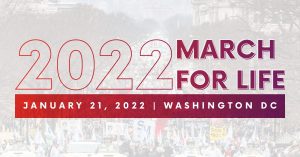 Join us at the world's largest pro-life event!

The right to life is a human right. Our defense of that right is a joyful witness to the beauty and dignity of every human person.

The March for Life is an inspiring, peaceful, vibrant, and joy-filled rally of women, men, young people, and children from all across the country. Every year, tens of thousands of pro-lifers converge on the National Mall and march on Capitol Hill on the anniversary of the Supreme Court’s 1973 Roe v. Wade ruling which legalized abortion in all 50 states. It’s the largest annual human rights demonstration in the world. But this is not just a protest… TOGETHER, WE GATHER TO CELEBRATE LIFE. We celebrate each and every life, from the moment of conception. We envision a world where every life is celebrated, valued, and protected.

Since 1994, DCRTL has led pilgrimages to this event. Saving lives by ending abortion and promoting a culture of life is why we march each year. But we need YOU to be a part of this effort! Would you like to be a part of this year’s pilgrimage? Approximately 250+ people from our area will be participating. There is room for you, your friends, and family! We really hope you can join us.

Some details are subject to change, but the general schedule is as follows:
• Wednesday, January 19th - Depart in the evening from Dubuque & Dyersville
• Thursday, January 20th - Arrive to DC; Attend pro-life Mass at the National Shrine
• Friday, January 21st - March for Life Rally; March; Night Tour of Monuments
• Saturday, January 22nd - Free Day; Depart for home after Mass in the evening
• Sunday, January 23rd - Arrive at home around noon

Please refer to the "Deadline" section below for when down-payments, final payments, as well as apparel orders need to be made. You are welcome to make full payments if you prefer.

TBD
Chaperone & adult registration due with $150 non-refundable down payment

TBD
Leona J. Fluhr Scholarship Application Deadline for those who are eligible (students grades 7-12 who reside within Iowa House District 57). See attachment #1 below for more information.

TBD
Respect Life Essays due to school contact (see below for more information).

TBD
-Final payment of $250 due for everyone
-Pro-life events and reflections due to school contact - all students are required to participate in FIVE (5) pro-life events or activities leading up to the March for Life. Please click on the "Pro-Life Events" tab on the left side of the page to be directed to opportunities. Please contact your March for Life leader/school contact for more information on additional opportunities.

Every year DCRTL requires all students attending the pilgrimage with us to submit a short essay so they can really reflect on the reasons as to why they are going to Washington DC to March for LIFE. We strongly believe that this is an incredibly important piece to the journey. Plus it's an opportunity to receive a scholarship!

All entries are due by: TBD

Awards:
• High School and Middle School entries shall be judged separately. Both will have winners.
• First, second and third place winners will be chosen from all the submissions and will receive monetary awards:
• First Place: ½ of pilgrimage paid, $200
• Second Place: $100
• Third Place: $50
• Each participating school shall have ONE winner
• Prize includes a T-shirt and bumper magnet

DUE DATE: All entries are due by TBD

For more information or questions, feel free to call Dubuque County Right to Life at 563-556-5960

If you are interested in attending the National March for Life with DCRTL but don't have the funds, please reach out to DCRTL@DCRTL.org and we would be happy to work with you in providing a scholarship based on your needs. We believe this experience is incredibly important (& life changing!) and don't want finances to prevent anyone from attending.

“I was so amazed and in awe of how many people feel so strongly about protecting life. I’m proud of how my daughter embraces the pro-life movement and I hope she carries that passion with her always. I enjoyed spending this time with my daughter and having many meaningful conversations about all we experienced and witnessed in D.C. I will encourage other youth to make this pilgrimage and deepen their respect for ALL life! Thanks DCRTL for making this experience possible!” -Anonymous Parent

“During this trip I saw more people in one place than I have in my whole life. It was an absolutely amazing experience to fight for the lives of the innocent and voiceless. The most amazing thing was seeing all of us (strangers) becoming one. We united and became one loud voice for all of the 61,000,000+ voices, and lives lost due to the terrible act of abortion. I will always remember and be so proud that I got to participate in the act of FIGHTING for life.” –Abbey Gasper